Leadership for Change, Empowerment to Innovate, Collaborate to Succeed: This was the theme of the 2019 visit from delegates from our sister city, Viña del Mar, Chile. For 10 powerful days in August and September, the Viña del Mar Operations Council (VDM Ops Council), took that theme to heart.

The cornerstone of our exchange with Viña is with a group called AGEP, (Asociación Gremial de Empresarias y Profesionales, or Union of Women Business Owners and Professionals). This group of 50 women from the Viña del Mar/Valparaiso region network, support and do business with each other. Since 2011, the Sausalito VDM Ops Council has been mentoring the women of AGEP, through a series of programs designed to empower them to think, act and perform like the strong women of North America. We fashioned all of the workshops around the themes of leadership, empowerment and collaboration, and we modeled the message in all of our additional activities.

We alternate locations between Viña and Sausalito every year, and this year we welcomed 8 women from AGEP and two Viña city officials. Following a cheerful arrival by ferry from San Francisco, the women each went home with a local family where they stayed for the next 10 intense, and intensely fun days. Thanks are due to these “home stay” families, who chauffeured, fed, pampered and taxied their guests on time where they were needed every day. This year’s home stay families were: Monica Finnegan and Mike Kelly, Cathy Stierhoff and Frank Lawler, EV Gilbreath and Stanford Hughes, Tricia Smith and Tom Theodoras, Brenda and Rene DeBruyn, Lorna Newlin and John Henderson, Susan Roe and Tom Clark, Maria Paterno and Holgar Mishal. We couldn’t have done it without you! 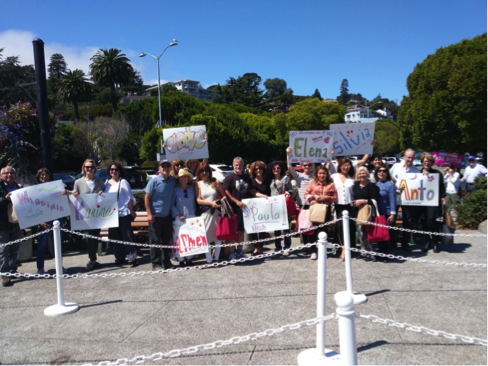 Home stay families and Sister City members at the Sausalito Ferry Landing where our guests had just disembarked.

For the first time since our exchange started, the group was here during the Sausalito Art Festival. In fact, one of the women, Britania Salinas Mayne (Mitty), was juried in to the Festival, and had a booth showing her lovely oil paintings of landscapes and scenes from Chile. We collaborated with the Festival and so were able to share information about our Sister City Program from her booth as well. As a result, many visitors stopped by to admire Mitty’s paintings, and stayed a while longer to hear about our program. 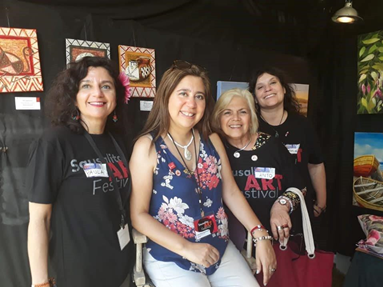 Mitty, second from left, in her booth, along with other AGEP delegates.

In addition to helping Mitty at her booth, the rest of the women had a true “only in Sausalito” experience: each of them served a volunteer shift all three days of the Festival! And they don’t speak English! In a true spirit of collaboration, Juli Vieira (CEO of the Chamber of Commerce) helped us arrange for all of the women plus interpreters to serve a morning shift, all three days, at either the Chamber Food Booth, one of the lemonade booths, or one of the wine booths. A big thank you to the Festival and Juli for helping us make that happen. Starting with rocking out at the “Summer of Love” Preview Party, the women experienced firsthand how our community comes together for the Festival. And, Mitty sold almost all of the artwork that she brought 6000 miles from Chile! 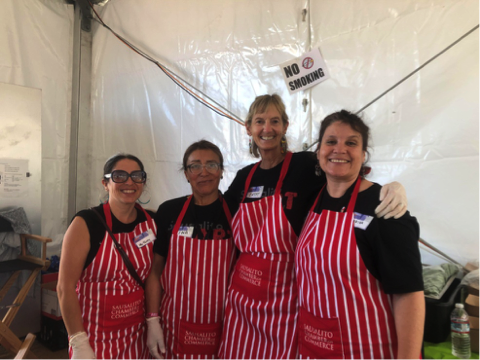 After the Festival, the real work began. Meeting daily at the Community Room at the Sausalito Fire House, we had three days of workshops and panel discussions. The speakers and topics were all chosen to address issues related to our theme. One of the highlights of those three days included a panel of three inspiring women, all honorees in the Marin YWCA’s Hall of Fame. Each of the women shared their personal story, how they achieved their goals, and the importance of giving back to their community. Another day, Sausalito City Council Member Joan Cox, former mayor of Belvedere Claire McAuliffe, and Deana Kardel, Owner, EOS Consulting (and VDM Ops Council member) held a panel discussion on Finding Your Voice: To Lead, To Make Change, and To Impact. 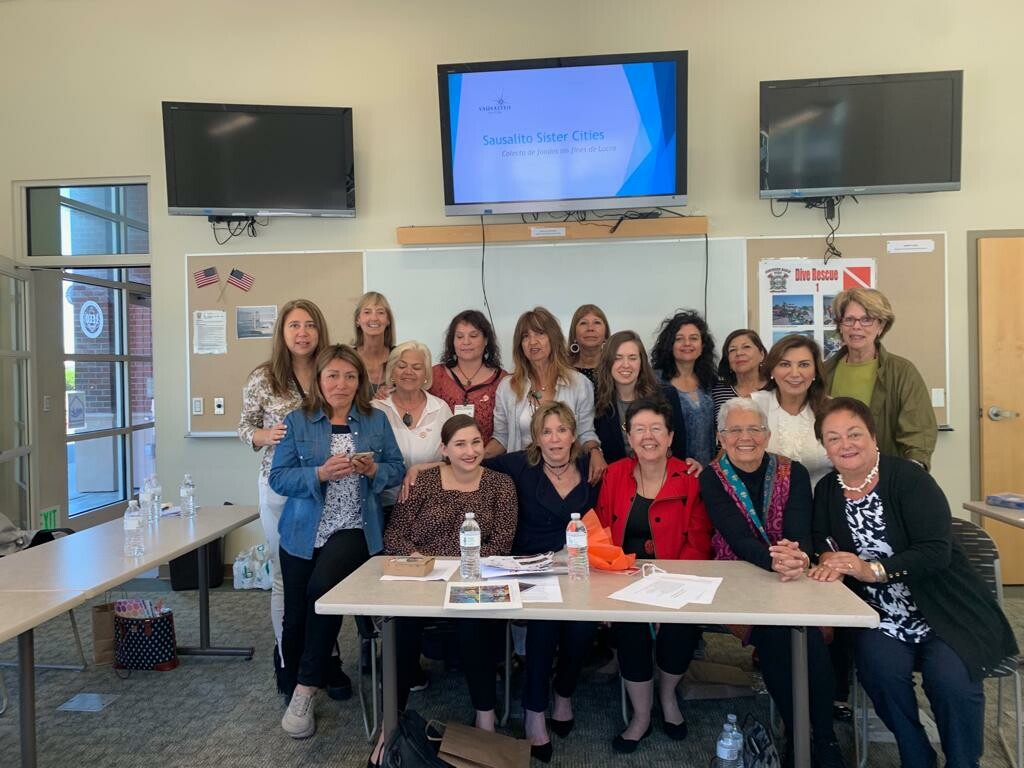 The head of the VDM Operations Council is Monica Finnegan, who has led the group since our re-boot in 2011. Other council members include Cathy Stierhoff, Lorna Newlin, Deana Kardel, Karen Aiken, Brenda DeBruyn, and Lizzie Jeremi. And we have enjoyed the support of Susan Roe, president of the Board of Sausalito Sister Cities, Inc.

Another first this year, was one-on-one interviews between each of the delegates and local business owners in their respective field. For example, a hostel owner from Viña met with the manager of the Marin Headlands Hostel; a caterer/baker visited the early morning kitchen works where Tera Ancona does her baking for Cibo; and two jewelers were treated to a behind the scenes look at goldsmithing at Sarah Swell Jewelry. A huge thank you to these and the many other businesses who participated, including Katya Glass Jewelry, Dynamic Energy Crystals, Something/Anything Jewelry Gallery, Soxalito and Jewelry by the Bay, Sausalito Sweets and General Store, Casa Madrona, Gables Inn, GrDano Boutique and Design Studio, and Sausalito Village.

The week was packed with more events, including a tour of The Marine Mammal Center, a tour of Studio 333 and discussion of co-working spaces with owner Christopher Holbrook, a visit with Chilean-born artist Anne-Marie de Rivera at her studio in the ICB, a cocktail party at the new Hanson of Sonoma Vodka Tasting Room at Hanson Gallery, and a pottery class and marketing discussion with Lorna Newlin at Sausalito Pottery.

We stayed, shopped and dined local! Evenings were often spent at local venues, including cocktails at Copita, dinners at Saylor’s, the Sausalito Cruising Club, Osteria DiVino, Angelino’s and dinner and salsa dancing at The Seahorse.

Keep in mind that our sisters from Viña speak very little, if any, English. We are so fortunate to have two of the best translators on our team, who were on the job every day, and who went with us everywhere: Brenda DeBruyn, part-time Sausalito resident, and Lizzie Jeremi, Chilean by birth and a life-long San Francisco resident, who has been an invaluable part of our team since we started our exchange. 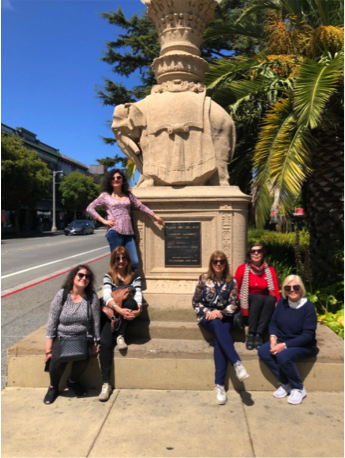 Six of the delegates at Viña del Mar Park, dedicated to our Sister City relationship in 1960.

We also owe a debt of gratitude to several City of Sausalito staffers who jumped in with our team and helped us immeasurably. It would take too long to describe all the trips that Mike Langford, Director of Parks and Recreation, made in the City van. Think large suitcases. Lots of them. In and out several times. Mike was our hero when it came to all the heavy lifting and shuffling around, and not just suitcases. He also helped set up Mitty’s booth, along with Tom Clark, and was there for us during the dismantle and load out. Maybe it was because of all the hugs he received from our “sisters,” but Mike always kept a smile on his face, no matter the load! Also on hand as translators at the Festival and for other events, were Maria Hernandez, Administrative Aide for the Department of Parks & Recreation, and City Administrative Aide Serge Avila. ¡Muchas gracias!

On the final Friday night of their visit, Wayne Kaleck opened his exquisite boutique Shoe Stories of Sausalito for a “trunk show” where the women displayed their handcrafted products for locals to come and shop…and shop they did!

Finally, Roxanne Sheridan graciously opened her lovely home, The Pines, for a farewell party, where we were treated to a presentation of Chileans dancing a traditional “cueca”, in addition to a surprise dance performance by several of the women delegates. 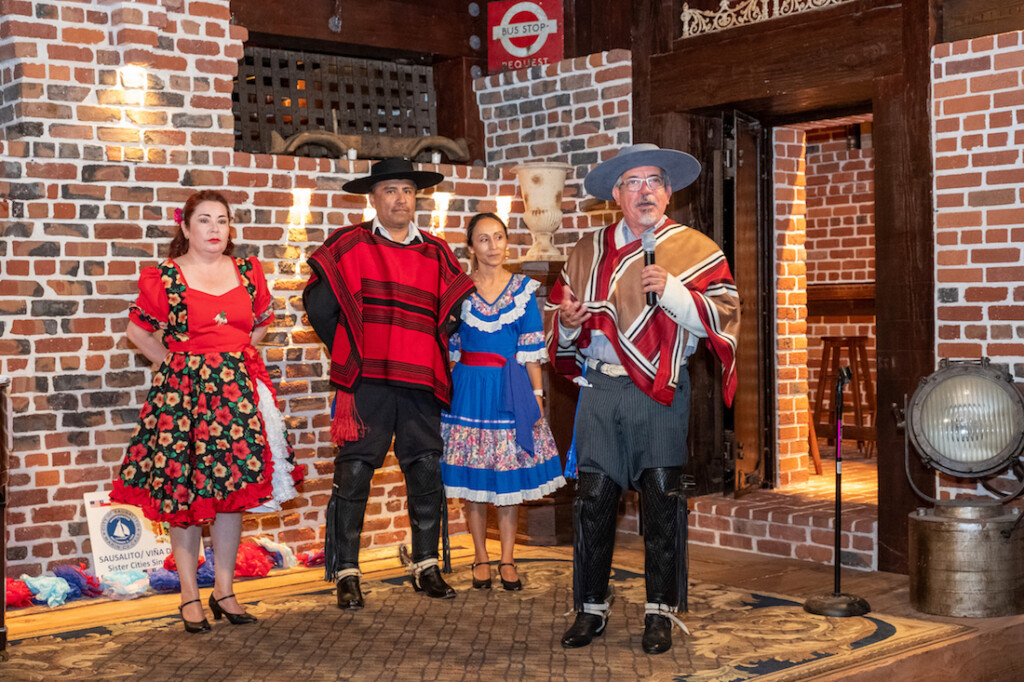 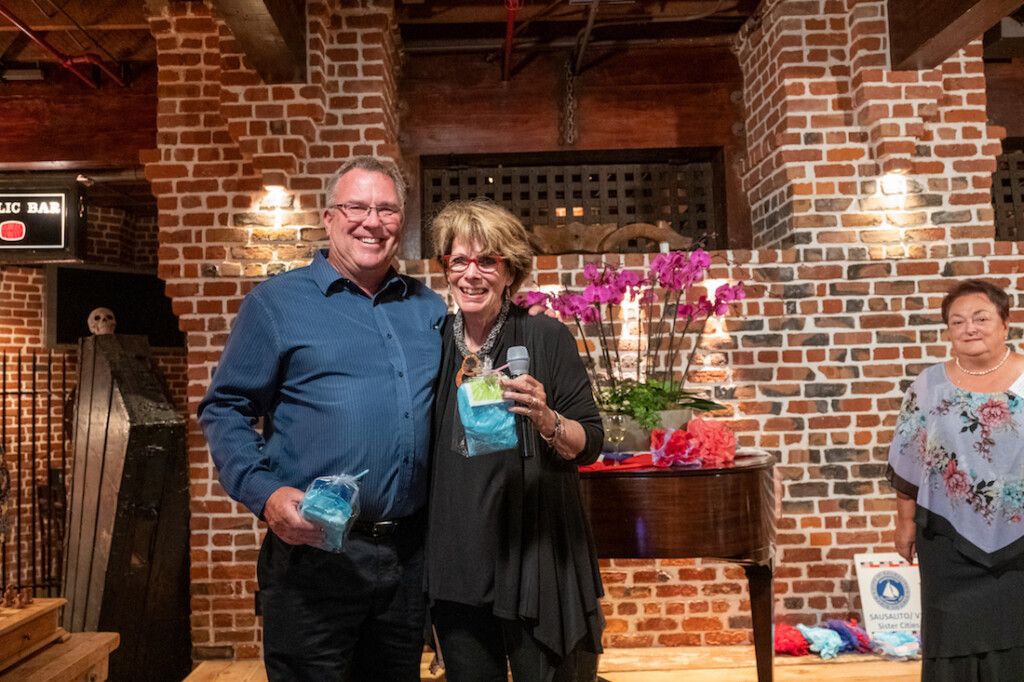 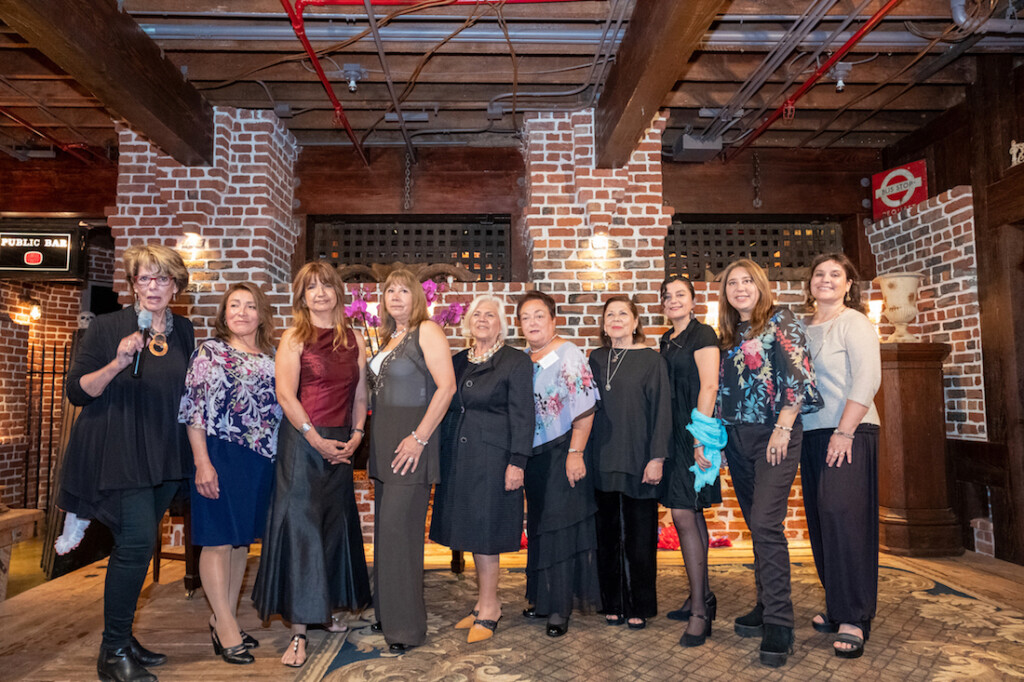 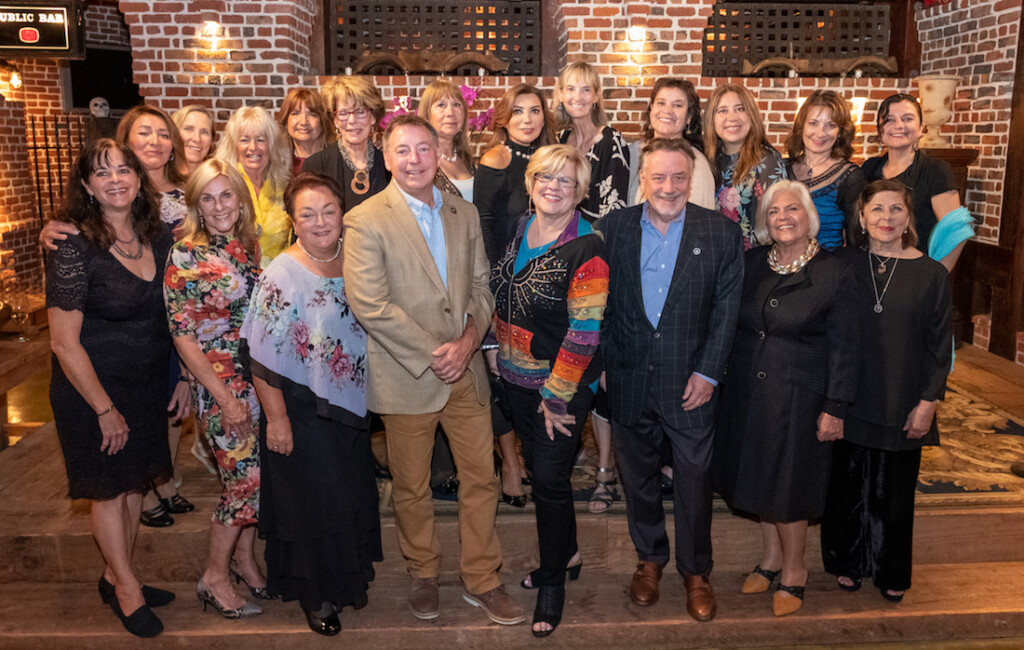 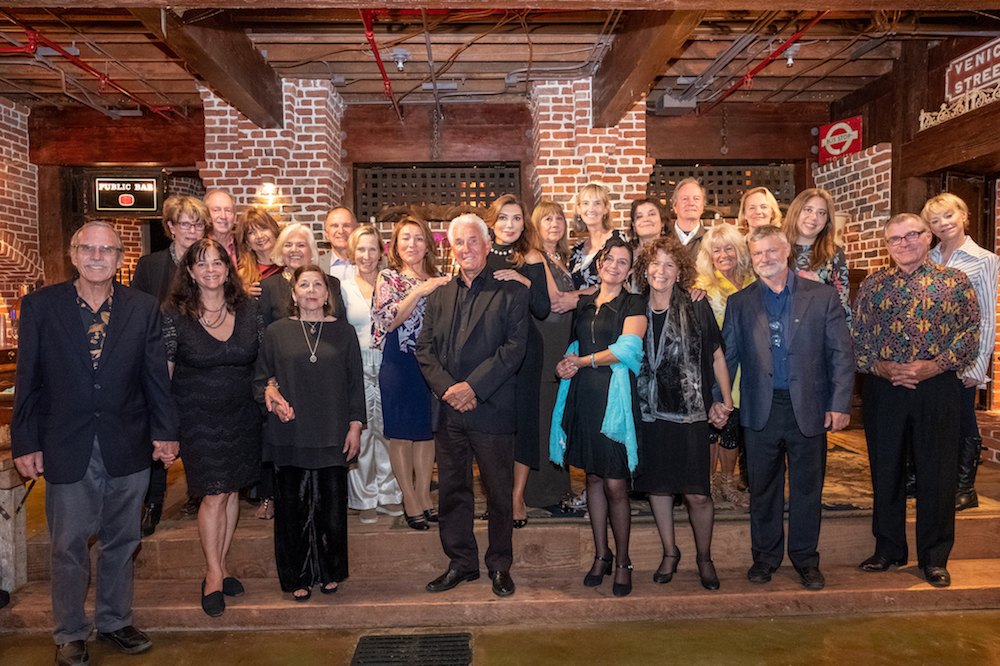