It was Friday 28th July, 2017. An excited flock of 14 teenagers and two chaperons wearing bright tie-dye ‘Summer of Love’ T shirts converged in Sausalito City Hall’s parking lot. Armed with suitcases and back packs identifiable by multi colored ribbons and luggage tags, the mixture of excitement and trepidation was palpable. Their parents said farewell to them as they embarked on a life changing, 10 day trip, to Sakaide, Japan. While some were already well travelled, some had never been outside of the USA, and others had never been on an airplane before. Accompanying the delegation was Sausalito’s Vice Mayor Joan Cox, Program Committee Chair, Chris Gallagher, and Chaperones, Lynn Reid and Stephanie Miller.

When they arrived in the City of Sakaide they were greeted by Mayor Aya of Sakaide and their host families. Some spoke English, some did not. For many gesturing was their only form of communication. The students lived with host families, fully immersed in the culture, daily lifestyle and mores of Japan, sleeping on futons and tatami mats, eating cross-legged on the floor and perfecting their use of chopsticks. The bonds formed between the students and host families were strong and warm. Saying goodbye at the end was very emotional for all. They will stay in touch and many of their host siblings plan to come to Sausalito next year.

The City of Sakaide organized a full schedule of activities for each day including the traditional tea ceremony, ike bana flower arranging, origami and other traditional Japanese crafts, including Chanbara martial arts, kayaking, making Wasanbon Japanese confectionery and more.

One of the highlights was visiting the top of the Seto O’Hashi, a 16 mile suspension bridge, and looking down at its vastness with whirlpools in the water, and cars and trains traveling underneath. This bridge was designed along the lines of the Golden Gate Bridge to join Shikoku Island with the Japanese mainland just as the Golden Gate Bridge joins Marin County and San Francisco.

Learning Japanese calligraphy from teenagers at a high school in Sakaide demonstrated that it is not as easy as it seems and indeed, gave the students an appreciation for this skill. The delegation was graced with an excellent performance by the high school’s brass band and had an opportunity to compare both their academic and social lives in American and Japanese high schools. Meeting Japanese teens and seeing commonalities and differences in their school systems was thought provoking and interesting. The students also met with preschool children at the local library where they read illustrated English books to them. Of course, the children were very cute and endearing.

Apart from being an educational and cultural experience, it continued to build our community across the globe. People from Marin know people in Sakaide and vice versa. Gifts were exchanged and memories shared.

Upon their return, the student delegation provided a presentation to the local community sharing their lessons learnt. This was held at the Sausalito Yacht Club. Students presented on various topics including:

The bond the delegation shared is remarkable and their new friendships are likely to last forever.

Surveys administered to parents indicated that their children came back in good spirits, that they had grown up, were more mature, and had broadened their horizons and perspectives. They were better prepared to try new things and made them feel connected to the global community. With respect to the Program’s Orientations and preparation for this trip, parents felt they were extremely helpful in preparing them and their children for the journey. The Launch Party got top ratings: in their words, it was “excellent”, “fantastic”, and at a “great venue”. Communication between program and parents was described as excellent throughout the process. Most importantly, the students loved their host families.

Surveys administered to the student delegation returned varied feedback. Responses regarding the orientations included: “I was very well prepared”, “I feel the orientations did a great job preparing me”, “we needed more Japanese language” , “I loved my experience” , and “I really enjoyed staying with my host family and wished I had more time with them.” Every single student delegate said they loved their host families and found living in their homes an enjoyable and substantive experience. Families took them to places not included in their daily program, and immersed them in the Japanese lifestyle. Some of the students said it was a life changing experience for them and felt that it was the best travel experience they had ever had. 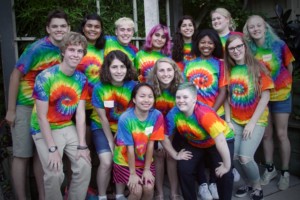 About the Student delegation